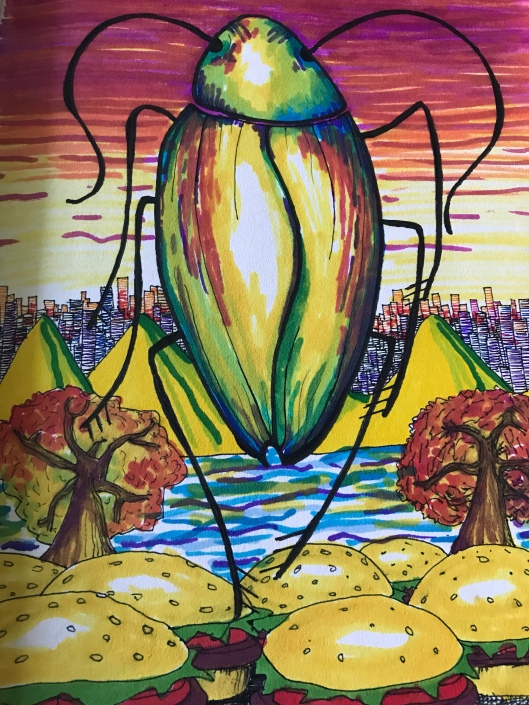 There once was a little chocolate mouse who lived in a tiny white chocolate house. His name was Waddled Frump. His floppy peach fuzz plume of hair signaled a rare breed of arrogant panache. What he touched turned to acrid garbage juice that ran down backward streets into the water system, into the hearts and minds of all in the land.

With one bloated hand, he pointed out his blame with a greasy french fry finger, while bashing out his signature in ink made from McDonald’s ketchup and the blood of all but himself, with the other. He slathered his phone in lard so his stubby digits all but flew across the keyboard, adding additional ease to his hand to mouth twittering. The texting prez.

He slept heavily like a warlord without a care in the world, sweating and snoring . Meat and panties dripped down his chin; dreaming deeply like a little baby after a long day at the beach.  His shocks of prepubescent head hair remained innocent and golden, swaying like neglected prairie wheat atop his cheese burger face of a steak. His brow carried not the weight of a thousand worldly puzzles that begged a solution, but they furrowed still. A frankenfurter had been implanted in his forehead some years earlier, making a perfect caveman mono-brow.

His face did became more purple over time, but not from the stresses of the job. He had always been successful at failure. That was his steady. It was probably the burgers, the Oreos; the sides of salad he gleefully switched up for fries. Nodding to himself, and humming with each bite the way one does when a clear decision has been realized. He wore a bib on his back to sop up the grease on his cocktail weenie fingers whenever he wanted to give himself a nice pat on the back. It worked. He was smart, savvy, and he knew how to navigate himself–deep waters of spray cheese foam gurgling in a mist of coal soot.

His beady little eyes–one red and one brown, saw no gradients in color. Instead they perceived only contrast. This was how he liked it. For all his little dinky cars and army mans could be easily chucked left and right into appropriately labeled little boxes. Frump loved his little toys. He dreamed of building massive walls made of jellybean and rayon that spelled out his name. His brand. “That would keep the bastards out,” he thought to himself, in his little white house.

At first, the people of the land looked on in a kinda sorta funny disbelief. They cited all the jokes that came before him–about him. Jokes so absurd and ironic; funny because they could never come true. A chocolate mouse in the little white house? Impossible. But funny, nevertheless. A laugh, and a sigh of relief was how it used to play out. But now, good golly what had happened?

Soon enough, all the little peeps of the land started to wonder if maybe they had wished this. Who let this idiot out of the TV box? Pigs were flying, circling around unicorns dying. It was a freak show, and the turkeys had definitely come home to roost.

But somewhere on that timeline, burned into the ground from Frump’s leaky pampers, the people started to see that maybe all this was good after all. Maybe it was necessary, if just to never let something like this happen again. No more keys to the trolley would be given to giant man babies. No striped conductor hats would be handed to another train wreck. And a whole lot more fucks would be given all over the place, about a lot more stuff that mattered to a lot more people.

Mr. Douche Lantern’s toy chests would have to be spilled out again. What a mess. And with only 4 years to clean up such a busy boy’s bunk bed, not a lot of ground would be covered–at first. Things would have to be organized and righted, but at least color wouldn’t be part of the system. Nor would the variables of human to human love. Or harmless pleasures.

Dine and dash. That was his game, always. Casinos, hotels, a name, brand, a burger, a cookie. Bills unpaid and people pissed… Scam after scam. Our gaping red tongues rolled out a carpet to the control room, and a pimp waddled up to the levers and buttons, jingling his keys.

And yet it is good. It is as it is. And it’s a reminder. A break in the radio waves. We’ll hit the top of the TV hard the next time around. And keep our twisted satires to ourselves, lest they become reality. We will remember that once there was a buffoon, worse than many other buffoons, that triggered a much needed change.

Nothing knows what creates monsters. But if not us, then who? One thing is certain, however. When the diarrhea spackle has settled, dried and crumbled away, we’ll be OK…

Donate to The Donkey

Till Next PostJuly 31st, 2018
Post has arrived at Donkey Junction

Holy #molé
#applecidervinegar #fermentedfoods read the new post on the blog. Link in my bio
#yamleaf
Cinderella #salmonella it’s been a rough week of food poisoning. Read all about it on the blog.
#typhoon #pizza Getting ready for Maria. New blog on the donk.
#urbangarden Check out the new post on donkey.kitchen. Link in bio. Plant food everywhere!

I’m basically a jack-ass of a few trades. I love cooking and talking about it, geeking out and sharing ideas as we go. I'm a five trick food donkey art and music middleaged man-boy, and happy to be so. I’m writing this blog for anyone else who enjoys making food and talking about it as much as I do. At the heart of it, I just want to make some laughs, while doing my best to be informative when I can. I'm not trying to re-invent any wheels here, but through my own trial and error--as a home-cook--, and with my own franked opinions as a writer/observer, I'm going to share. Hopefully it goes both ways because that's what the world-wild-interwebs is really all about. EK